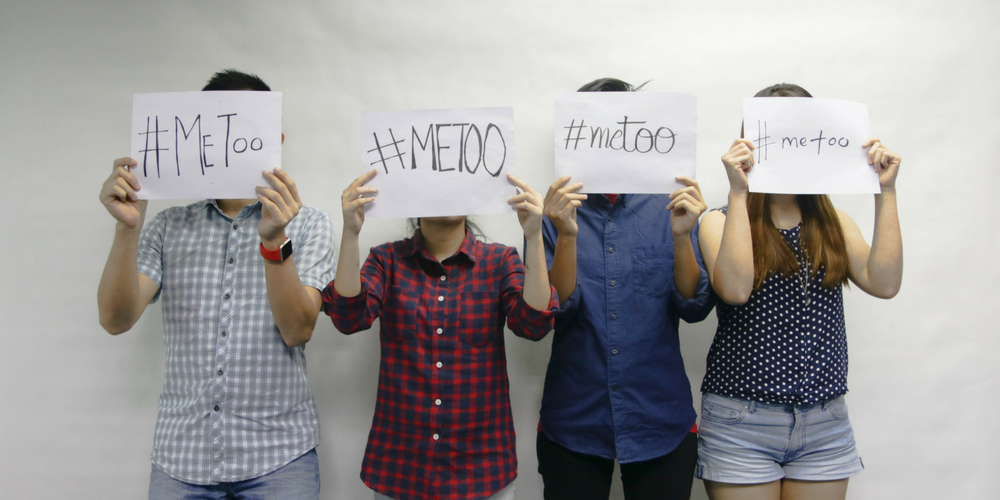 You may or may not have seen the hashtag #MeToo causing a huge buzz on social media for the past two weeks.

#MeToo is a global phenomenon that came to life following the myriad of rape and sexual assault allegations against Hollywood producer Harvey Weinstein.

Personal stories shared with the hashtag highlighted the reality of how catcalling, molestation, abuse and rape happen on a daily basis to the people around us.

Despite it being a largely tabooed topic in this country, Malaysians have also come forward to share their stories using the #MeToo hashtag. It casts a particularly chilling effect when we see friends within our circle share their accounts, too. We spoke to 8 Malaysian millennials about their two cents worth on the subject matter:

“I think it has started a lot of conversations and it has certainly destroyed the taboo of sexual assault as a topic.”

But besides that, it does a good job of making netizens realize how often sexual assault happens to both men and women. The only downside is that not everyone has Twitter, not everyone has internet, and the message is limited only to that platform. If this movement is brought into the public as actual campaigns around the world, only then will you see the real impact. Right now, it’s just tweets.

There will never be a day when sexual assault doesn’t exist in our society but we can prevent it and be proactive about it.

I do believe the #MeToo movement creates awareness. But awareness without action is pointless. We need stricter laws and more education. We need constant awareness in order to change our society’s culture for the better.

“I think sexual assault on women is a reprehensible act and bringing awareness on the issue is definitely good thing. If its goal was to bring awareness, I would think it succeeded.”

Unfortunately, I’m rather cynical that social media campaigns like these are the long term solution to the issue. Anyone can Retweet a hashtag.

The response in Malaysia is rather muted. The hashtag has not gained much traction in mainstream as well as social media although sexual harassment and assault is rather pervasive.

To address this, I see government and the education system playing a crucial role.

Young boys have to be taught to treat females in the right manner.

Government needs to step in to table legislation that protects women against sexual crimes and prosecute offenders appropriately.

“I believe it is an achievement that Malaysia has finally risen to take a stand on sexual assault, instead of keeping the lid on it tightly sealed.”

I think its a good thing that Malaysia has taken the first step, but the next would definitely be to make it more than a hashtag, like taking part in campaigns against it and lending a willing ear to victims, with no judgement included.

More people are sharing their stories on Facebook and I get a glimpse into their thoughts on it. It feels more personal that way. You don’t really understand the impact it has on someone until it happens to you or someone you know.

Yes, people are more aware, they’re sharing, but they have yet to take action on it. It’s good that it started out as a online social movement, but more needs to come out of it before we can tell whether it yields a good or bad result.

“Good to see that victims started to stand up for themselves and raise the awareness that, it indeed is a problem in our society.”

Harassment can come in many forms. Most guys don’t realize that their jokes are actually contains sexual harassment elements.

In a setting when a girl is pressured into it (eg. clubs and parties). Most of them don’t even dare to voice out for being afraid to lose her “friends”, or being not “sporting” enough.

Sometimes, the form of harassment is so common that you will start to accept it as being “normal”, when it shouldn’t be.

“It’s a good beginning to a conversation, but the issue I’ve always had with social media movements is that people let them end there.”

Think of the whole Kony debacle. On the other hand, the Ice Bucket Challenge raised US$115 million, and those funds contributed towards breakthrough research.

My question to the #MeToo is what next? So now we know, it’s happening everywhere, it’s happened to (almost) everyone. I admit I sank into the whole “it’s going to keep happening, nothing’s going to change”. But sometimes movements like these give me a flicker of hope that something can change.

The male hashtags that have come up in response (#How I Will Change) are encouraging, but what I wonder is, are these even reaching the right audiences?

Those people who are sharing and joining the conversation, I would count them as the more “woke”. It needs to go further and do more. But perhaps I’m expecting too much of the humble hashtag.

Personally, I’ve only seen 4 friends actually sharing. But to be fair, I didn’t share any of my experiences either. And like so many others, I also have #MeToo stories.

It’s a start. But it’s not enough. Laws and legislation need to change. Culture needs to shift. But all movements start somewhere, maybe this hashtag is one of the stepping stones towards actual change.

“The #MeToo movement is important, relevant, and completely necessary. But sadly, will fade away just like all the other internet fads. I’d love to be proven wrong though.”

To an extent, maybe (it has achieved its goals). The outing of Harvey Weinstein as a serial sex offender has definitely aided its cause. But I feel that as quickly as the buzz has escalated, just as quickly could it fade away just like Kony 2012 did.

Malaysians have been talking, but not nearly enough.

My friends and I have broached the subject, but only briefly. We have so many things we like to make hot topics; this should be one of those things. It definitely has gotten me to think about whether such incidences have been happening closer than I’d like to think is comfortable. While I won’t start suspecting everyone and everything, the thought of something similar happening around me does tend to pop up once in a while now.

“To me the movement is a powerful one where it gives women across the globe the strength to come out and tell their tale of being harassed.”

That being said, there are many who misinterpret the concept of it and use it just for popularity sake (e.g. to get a high number or Retweets on a post or likes).

This diminishes the purpose greatly and paints an even darker image of men while hindering the fact that women can also contribute to the harassment. Nevertheless, as a feminist in my own way I do support the idea of it for people being brave enough to voice out their own experiences.

Hopefully many others will see it as something they would not need to hide the fact that they have been harassed and hopefully be brave enough to report it and not bury it under the hatchet.

Honestly, a movement like this is not effective making men more morally aware in about the things they say and do around women. Usually it impacts people only when it reaches a more personal level such as it impacts one of their family members or someone they are affectionate for. And I don’t blame them for its usually due to the lack of education as a child that this occurs.

However, its not impossible. For this to occur, a drastic change needs to occur to the mindset of men and women around the world.

“After going through the stories, it reminded me that sexual harrassment and abuse does not recognise skin colour, class, background, age, religion.”

I feel that it has achieved its goals in terms of reminding people and making people understand the magnitude of this issue. It really sucks that this is what the human race has in common around the world. And these stories are posted by people that has access to internet, with a mobile phone subscription or a computer.

So the conversation has definitely started and awareness was raised, but it beckons the question on what the real impact actually is on our daily lives.

I feel that a movement like this needs to have a call to action. After reading all these discussions and honest sharing, what happens after?

After sharing these stories, the victims/survivors would probably have a brief moment of relief, then what? Would there be a stricter implementation of new laws?

Will there be sex education implemented in schools that will educate the young minds on the moralities that lie behind social issue so that in future, it will not be a social issue anymore.

Did you know that only a handful of countries have laws which explicitly criminalizes sexual harassment? In fact, in Malaysia, the only laws pertaining to sexual harassment are found in Section 509 and 354 of the Penal Code.

However, it is in my opinion that the two provisions do not offer sufficient protection for sexual harassment victims.

Besides legislation, the enforcement against sexual harassment has put victims off from reporting them.

Where do victims turn to when victim blaming happens even in the police station?

But some recent developments are giving us hope for change.

Just recently, the Women, Family and Community Development Ministry recommended a review of the school syllabus to incorporate sex education in the subjects of Moral Education and Islamic Studies.

Additionally, the Sexual Offences against Children (SOAC) Act 2017 which criminalized sexual grooming was gazetted in the middle of the year and is now in full force following R.AGE’s award winning exposé on child sex predators: Predator In My Phone.

Positive changes like these should be highlighted and spurred on, and we can all play a part as Malaysians to spread the voices of reason and to speak up for the least of us.

What’s It Like Being A Female Professional Gamer In M’sia? We Find Out.
To Top