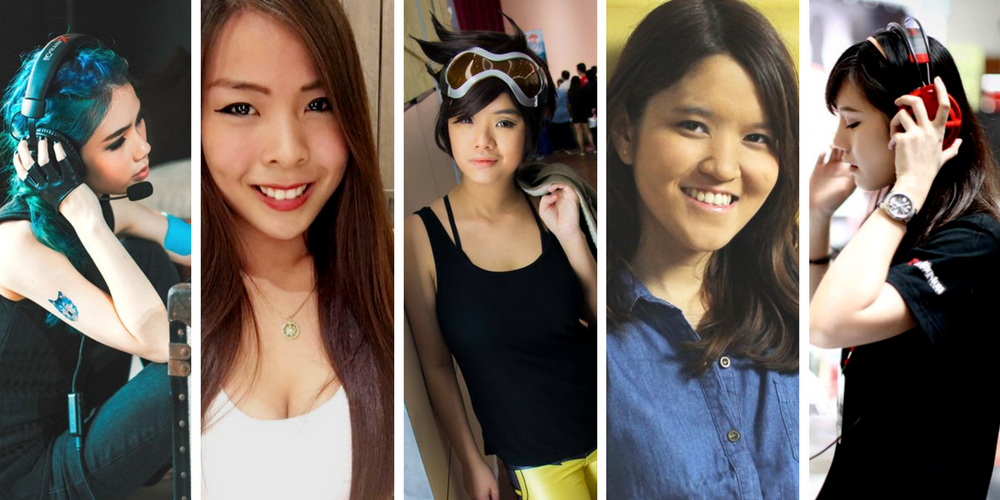 Female gamers are no unicorns. In fact, they’re everywhere these days and even competing professionally.

Gaming is slowly gaining its recognition and earlier this year, the International Olympic Council’s regional arm has even announced that competitive video gaming will be inaugurated as a medal sport. In fact, it will officially be observed at the world’s second-largest sporting event, the Asian Games, at its September 2022 meet in Hangzhou, China.

With that being said, gaming is definitely growing in relevance, but what’s it really like for the fairer sex? We get 4 professional female gamers and a female gaming startup founder to weigh in.

“I think we’re over the whole “female gamers are unicorns” sentiment in this day and age. They’re all over the internet now.”

Female gamers used to only play supportive roles and male gamers would come to the rescue when those playing supporting roles are under attack. Hence the term “knight in shining armour”.

But in truth, female gamers don’t need a knight in shining armour. They’re the knights.

My gaming career began when I was introduced to the Sudden Attack game by a friend from Asiasoft, back in uni. I formed and led an all-female Sudden Attack team and we competed at the Sudden Attack Ameteur Cup and ended up placing fist runner up. I’ve also organised the biggest Ti5 (The International 5) pubstomp at my previous job.

To be honest, my mum wasn’t really happy about this at first. She’s always wanted me to participate in beauty pageants instead.

The saving grace for her was when I became the gaming ambassador of TM UniFi back in 2011.

Today, I work in a Big Data company, and I am scoring the female gamers in Malaysia. They’re everywhere!

“When you game, it really doesn’t matter what gender you are. On the internet nobody knows if you are a guy or a girl.”

I started “gaming” when I was about 6 years old or so, when my parents got me a Nintendo Entertainment System.

One of the most common female gamer stereotypes I’ve gotten is “Pfft, female gamers always play support ‘cause they can’t aim”. I’d say, as much as I love to play support, I know plenty of girls that rock DPs and tanks. No really, they are scary. Girls can aim and be just as badass as any male gamer.

When my all-female Overwatch team made our competition debut in May 2017, people called us “6 Mercy Mains”. (Mercy stands for support in the Overwatch game).

Despite that, I would say that I’ve never been treated any differently, being a female gamer. People around me just see me as a gamer.

There’s really no such thing as a “female gamer”.

In my gaming career though, I’ve won 4 different Dota 2 tournaments, including the World Cyber Games Pre Qualifier back in 2007, while placing 2nd and 3rd place in 4 other competitions.

My favourite moment was when I won competitively against a male gamer in a 1-on-1 tournament.

Right before the game, he actually came up to me and said “Hahaha, aren’t you a girl? Can you even play?”

There is definitely a rise in female gamers locally. However it’s disappointing that most of them just place a lot of emphasis on looks and gaining followers but don’t game for real.

Most girl gamers I know aren’t committed enough and even when I played competitively like an addicted person, I still couldn’t top the top guy players.

I think you need to really work your ass off. Like seriously train as hard as a male gamer would. It may be difficult but if the passion is there, don’t ever give up.

“I’ve received countless sexist, obscene and highly-offensive comments that my brain has learnt to filter it out automatically. Things that I can’t even bring myself to say. Yes it’s that bad.”

The common misconception is that female Dota 2 gamers can only be good at support/healer hero roles, that we don’t have the determination to train and improve ourselves in order to beat others.

Even my parents weren’t supportive at first and they were appalled when they heard I wasn’t going to pursue a career related to my field of study.

The turning point was achieving first place with my female team in Female SEA League 4. It was definitely a milestone and it felt amazing that we’ve proven our strength.

Not gonna lie, it’s been really tough trying to earn a living and gain the respect of my peers in a male-dominated environment.

If you’re a female working in gaming, sometimes for the same amount of work it’d feel as though you get less recognition than say a male counterpart would’ve gotten

But simply persevere no matter what happens, stay focused and determined, stay humble, keep on improving yourself, and you might just end up on the biggest stage in Esports one day.

“Being a young woman starting a gaming startup is challenging, I think, in a multitude of ways.

Firstly, there’s the whole stereotype that women aren’t very good at gaming and are just in it because it’s “easy” for girls to get recognized for their sexuality, as opposed to their actual skills.

Most recently, while posting about Fundeavour in a Facebook community group, someone snidely commented that I was “yet another girl gamer”…until a Fundeavour member stood up for me, explained who I was, and told him I was “hardcore”. That was incredibly satisfying!” — Michelle told @PocketSun on Medium

In recent years, there is certainly more discussion in the gaming community on the best ways to encourage more female participation. There are no concrete solutions yet, but the fact that this discourse is taking place is a great sign

I’d like to see more female role models emerge for other aspiring gamers from both genders to look up to and strive towards.

To me, that’s the development that will help the most.

On the side, there is also a small movement beginning for females in gaming (in general, including game dev etc) in Malaysia and Singapore. Watch this space!

Female gamers have proven themselves time and again that they’re no different from male gamers in terms of skill and commitment.

Whether you’re a female gamer; male gamer; or a non-binary gamer, as the world of gaming gradually bleeds into real life with technology advances and growing interest from the general public, it is important that we work hand in hand to create a healthy culture of inclusiveness and adopt an active stance against discrimination in and out of game.

“It’s easy to forget what a sin is in the middle of a battlefield.” Solid Snake, Metal Gear Solid

Let’s not forget why we’re even gaming in the first place, to have fun! Uncorroborated stereotypes just take the fun out of anything.

The discussion of gender inequality is still ongoing, particularly on how gendered-nouns propagate unfair treatment towards women.

I for one think that there’s no better platform to promote gender equality than gaming, where gender is really irrelevant to competency.

We Get Millennials To Reveal Their Salary And Actual Budget Breakdown
8 M’sians Share Why Everyone Must Travel Solo At Least Once In Their Life
To Top
Loading Comments...
Comment
×