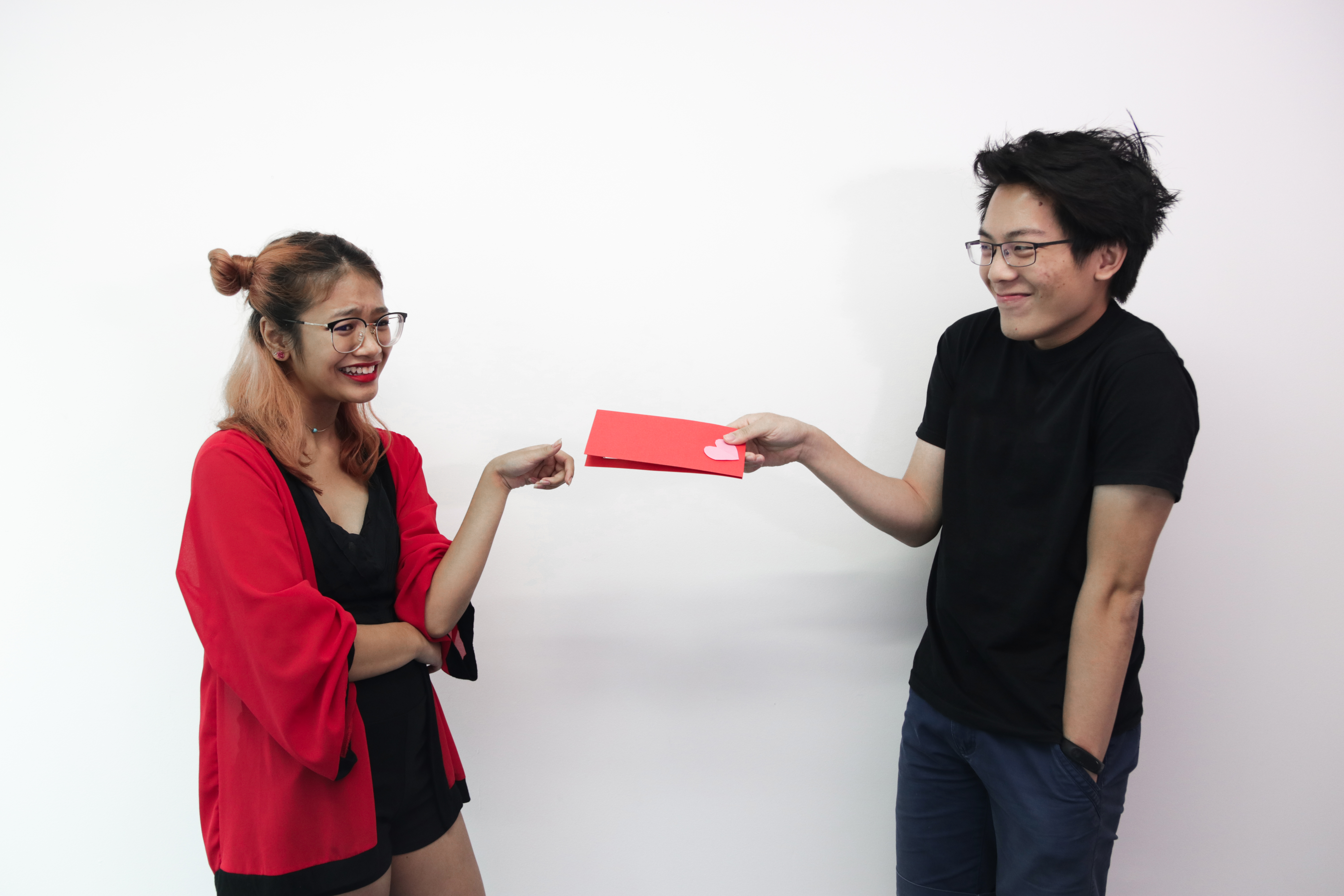 Well, that doesn’t apply to everyone, because there are brave souls out there who have crushed and confessed – there are even happy endings too! And we’ve gotten to tell us their confession stories.

It was a university mate who I confessed to – my first and current girlfriend.

I wrote a letter telling her how I felt and asked if she wanted to go out with me. I did it in university a week after we had a talk about our apparent mutual feelings. I was filled with happiness and adrenaline – Like when you’d trip and feel a lurch in your heart.

She said that she wanted to say yes but felt like it was necessary to have a 3-month trial, which I guess I passed in the end because we’re still together!

My advice to those who are too afraid to confess would be to just ask yourself whether you’d regret not doing it.

This was 6 years ago, when we were still in university doing our Masters together. I was very uncertain before I confessed – My fear of rejection was there. I do remember feeling the words coming out slowly but surely during dinner at one of our favourite spots.

She was surprised and told me to give her some time to think. She gave us a shot for about a week and we’ve been together for six years already!

If you’re rejected, it doesn’t mean the end of the world, just a small step towards other greater things in life.

I got to know her from an event in university. I remember taking her to the rooftop of the condominium where she lived. It was my first time confessing my feelings to someone so I felt really lost – I didn’t know where to begin! She looked lost too – she told me that I was the first person confessing to her.

Anyhow, she accepted me! I was so relieved and started thinking about our future as a couple. We’re still together today!

I’d say be brave to take your first step. Otherwise, you will never know how it will turn out, and you might lose someone who’s right for you in the process.

He was my classmate in Form 1 and I nicknamed him “2”. Now, 2 was going to transfer to another high school by the end of the year and I figured that I might never see him again. Although we weren’t that close, I decided that he needed to know what an amazing guy he was.

My confession was anonymous. I wrote him a note telling him that he’s an amazing guy and that whoever he winds up with in life is a lucky girl, then I stuffed the note into his backpack during recess.

I sat a few rows away from him in class. I remember watching him read the note and told his friend that he’d just received a love letter. Not too long after I saw him throw some crumpled up notes into the class dustbin. I figured my note to him was in there too. I remembered crying for many nights.

A couple of weeks later, there was a resident DJ who played Three Door’s Down ‘Let Me Go’ upon his request during Hari Kantin in our school.

I took that as a sign to let him go. 2 is now with an amazing girl. I’m truly happy and I wish the pair all the best.

I confessed to a friend I’ve known through an online community for almost 5 years. She was going to move out of the country indefinitely. I wanted to confess through a text but decided against it because I felt that she’s worth more than that.

So one day, as we were walking back home, we started talking about friendships. She mentioned how her friends would tell her that they love her very much through texts and phone calls, and I just blurted out, “I love you too, and like you more than a friend.”

I didn’t dare to look at her face to see her reaction as it was completely out of the blue. All I heard was that she was out of the market. At the time, I wasn’t sure it was a rejection and thought she was pushing the subject away. But it’s alright because we’re still friends to this day.

Believe it or not, I confessed to the writer of this article. At that time, we were just really good friends and I felt like moving things forward.

Knowing that there’s a 50% chance that she’ll say no, I came up with a script. We were watching Arrow on TV. When the episode ended, I turned to her and I completely froze – all planning flew out of the window! I told myself to relax and just let it flow and it worked.

“Whoa, okay,” was her only response.

I waited for months but when she finally said yes, I couldn’t stop smiling.

Although things didn’t work out for us after a while, my takeaway from this is that you won’t know how she/he feels until you just ask. Because if you don’t seek, you might never get.

He was someone I’ve known a long time and we got along quite well. Our older brothers were best of friends. When I started finding him more attractive in secondary school, I went back and forth from “Is it worth risking our friendship?” to “Why not?”

In Form 2, I think I remember asking him to meet me in our classroom after school. I’m not sure if my confession was confusing, but somehow, he misunderstood me and thought the one who had feelings for him was one of my friends.

So the next day, he approached her and they ended up together. I didn’t bother clarifying with him about my feelings after that.

There was a good outcome for them, obviously. But man I was disappointed. We’re still friends though.

Don’t get your hopes too high so you won’t feel as disappointed if it doesn’t go well. And make sure your confession is clear so there’s no misunderstanding like mine.

I thought I was in love with her back then – it felt like the real deal. We met when we were in form 1 and developed feelings a couple of years later. She was beautiful, smart, and kind. I used to drop everything just to help her whenever she needed it.

I told a friend and he convinced me to confess during a truth-or-dare game in school. I confessed to her but she started to ignore me after that day. I was told that she was uncomfortable. I respected it and stayed out of her way.

There was one time where we made eye contact in school in a distance, and gave a nod to each other. That’s how we made up. Although I feel that there are some residual feelings for her, she’s one of my best friends now. To me, it’s not worth potentially losing a friendship.

I was in high school, and she was a junior of mine.

You know how the koperasi will start selling roses and messages-in-bottles/test-tubes whenever Valentine’s Day is near? My friend had dared me to buy a rose and confess in public, in exchange for him doing the same. The whole “I do, you also do” sort of conversation.

I already knew she liked me from our previous interactions, it was just never spoken – so I felt oddly calm. But it was also the first time I confessed to a girl, and it had to be a public spectacle. All eyes on me during my first confession? Naturally I was a bundle of nerves!

So I bought the rose. And a box of macarons from a local café, because it was all the rage back then and there’s no way I was gonna buy overpriced heart-shaped Ferrero Rochers.

I hid them nicely under my prefect’s coat, which in hindsight must have looked bulky. I walked towards her in the canteen during recess and pulled the rose out. She nervously laughed and went on a tirade of “OMGs”.

We ended up texting even more. And we had a small thing going on after that. I had never had a girlfriend before, and I wasn’t sure what to do next. I don’t think we ever “officiated” it.

But after a month of back and forth, I told her I needed to focus on my studies and we shouldn’t see each other anymore. And that was that.

An advice? It’s not high school anymore, and even if you’re in high school, girls mature way faster than guys. So a girl wouldn’t say yes just because you pulled out a rose and confessed.

Build a trustworthy and fun-going friendship with the person you like first. And if you both really hit it off, then confessing should come easy. The prior friendship you have should tell you whether you’re meant for each other, whether there’s another guy or whether she just enjoys the friendship and nothing more.

Pick up those cues, and you’re golden. You’d never have to suffer an awkward rejection again if you just listen to her and read between the lines. If she’s not interested in a relationship, stay good friends. But who knows? Icebergs can melt, and things can evolve. Someday, it’ll be your day.

*Names have been changed to protect the privacy of individuals.