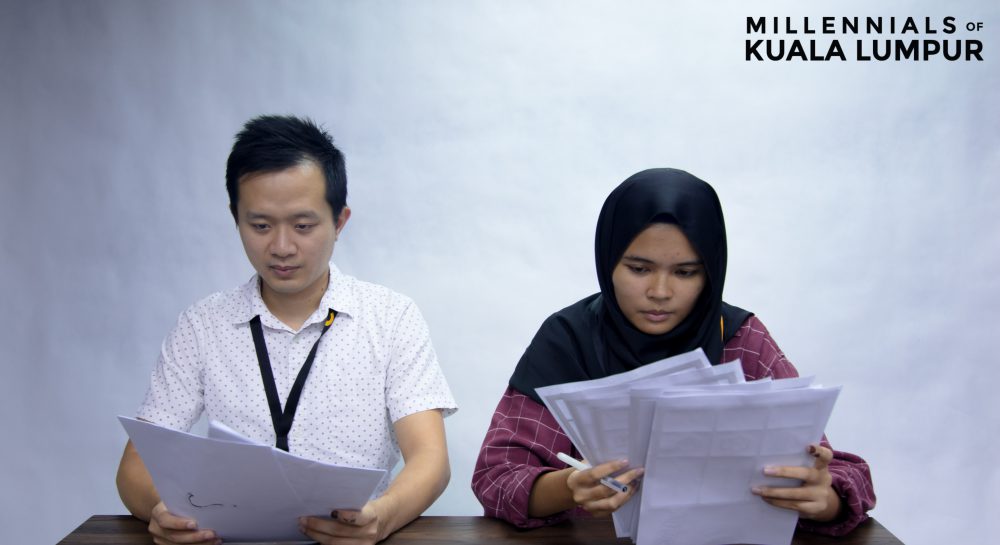 Elections are over, and it finally feels like Malaysia is moving towards change. Voters are regaining their trust in our democratic system, and finally, the rakyat are being heard. Despite all odds, we did it.

There’s so much that went into making this a reality. The voters that turned up, young, old, and overseas, the runners that raced against time to deliver postal votes, and the campaigners who rallied tirelessly, but we can’t forget the contributions of the Polling and Counting Agents (PACAs).

I feel that there was always this fear of things repeating itself, and we’d have another dirty election staining the history of our country.  The PACAs are in charge of making sure there’s no funny business, and we have them to thank that this election ran as cleanly as it did.

From crossing out names to counting ballots, we ask 8 millennials what was it like to be a PACA for GE14.

Being a PACA helps ensure that the election is fair–I remember hearing one of the candidates saying that. I didn’t know what a PACA was, or what they did, but I volunteered anyway. When I attended the training and learnt the process of how the election is run. And it made me realise that this was how I could contribute more.

On polling day, I was excited, but scared. It was my first time voting, and volunteering. I didn’t know how the procedure would actually be like, or what could go wrong–I felt overwhelmed because of how unfamiliar I was with the environment.

I had taken a shift in the later part of the day, and while there was a long queue when I came, it started to die down. Since I was in charge of crossing out the names of the voters, I could see just how many people didn’t turn up to vote. I got really upset. I wished they took the time to vote.

I would volunteer again. I felt involved, and I believe that it’s the youths of the country that should do whatever they can to make their country a better place. It’s their future isn’t it?

When I voted for GE13, I was still ignorant about the political landscape, but for this time around, I wanted to play a bigger part. I wanted to understand the process that goes behind electing a new leader, and to be involved as the last line of defense to ensure the integrity of the process.

One of the things that I was so impressed by was the amount of youth voters that turned up. About 85% turned up and stayed in line for hours just to vote. Their enthusiasm really blew me away!

It felt like a job well done for me. My friends congratulated me, for dedicating my time to serve my country and doing my part in ensuring a fair and clean election. I would definitely volunteer again for the next election.

I wanted to do something more tangible for GE14. I’ve participated in the Bersih rally before, shared information online to help people, but I wanted to do more and really get involved in the process of the election. I handled the admin work and coordinated my team. I had to make sure that they had enough information to carry out their tasks.

On the day itself, it was a rollercoaster of stress and emotions. I was up from 5:30am, and we only finished counting around 9pm. My team and I were really on our toes to look out for anything suspicious.

The most stressful part was during the counting session at the end of the day. All doors were locked, no one’s allowed to come in or leave the counting rooms, and quarrels did break out on whether the votes should be considered legitimate or not. it was so tense because the weight of determining the next leader of our country was on our shoulders. Tired or not, I felt the team really pushed themselves to focus.

The PACAs all over Malaysia guaranteed the integrity of the voting process. So, yes, I absolutely felt like I made a difference. Although it was stressful, I would volunteer again next election. I learnt so much, and I’m more than happy to be a permanent volunteer for PACA, because I believe that the elections should always be fair.

And I’m prepared to do my part to uphold that.

This was my 3rd time volunteering as a PACA. I believe that it’s a very important and critical part of the polling process in ensuring that it meets every rule and regulation.

The Ketua Tempat Mengundi and clerks were friendly and helpful. They were trying their best to follow guidelines. There was also poor crowd control. They insisted on the voters to line up for their saluran number even though they already checked it prior to coming to the station. It made the queues and waiting even longer than necessary.

It was obvious that their training wasn’t adequate. They were unsure about the details and specifics, and I had to remind the Ketua about sealing the ballot box, or getting necessary forms and stickers signed.

It may not have come from a place of malice, but it caused trouble for the voters by not being as prepared as they should be. I felt like it wasn’t really fair to the voters. Our roles as PACAs is to make sure things run as smoothly as possible.

I have no doubt that I made a difference, and I intend to volunteer again. PACA volunteers are involved directly in the process, and we also represent the eyes and ears of the candidates.

The citizens deserve to have a clean and fair election. It’s our basic right, and if the government won’t give that to us, then it’s up to us to claim that right.

The day itself was hectic. The turnout rate was high, and the queue was long. I had to rush over for my shift after casting my vote. I felt intimidated, because I was so afraid getting it wrong. This is a big responsibility, and I didn’t want to mess up. Thankfully, nothing irregular happened during my shift.

One of the things I noticed was how tenacious our senior citizens were. I was stationed at Saluran 2 where they were assigned, and I saw how some of them were sick and frail, but they still waited in line to exercise their right to a better country.

To be honest, I’m not sure if I made a difference, because I think there are other people who did a whole lot more than me. But I hope to contribute more in the coming elections as a volunteer.

Starting out small, and doing whatever little we can is a step in the right direction. There isn’t a better time we can make this statement–just look at we’ve achieved as a nation. We woke up to a new and united Malaysia.

I volunteered to be a PACA for the experience, and to understand more about the voting process.

I was both nervous and excited. It felt a lot like I was a student who didn’t study enough for an exam. There were a lot of last minute instructions that were very confusing. On top of that, I wasn’t sure if there was going to be violence on the day, so I mentally prepared myself to get physical if there were going to be riots or if fights were going to break out.

While there was a bit of tension between the other volunteers,  as we weren’t used to working with each other. But eventually we worked through it and helped each other out by making sure no one missed out on anything. Thankfully, things went smoothly.

I was stationed at the saluran for the second oldest age group, I saw a lot of elderly, and disabled voters that turned up to vote. It warmed my heart seeing because no matter how old they are, they still care enough to come out and exercise their rights.

Volunteering for the next election is definitely something I would consider doing. I really felt like I was a part of making a change.

I volunteered because it was the right thing to do. Being a PACA resonated with my personal morals.

One thing I noticed on polling day was how all the voters was looking forward for change. My own family and friends who weren’t aware of politics, and with traditional mindsets wanted something to change.

Because of this, everyone started becoming more aware of how the voting procedure was like. The station where I was assigned had a very high voter turnout.  The school was flooded with people. Each floor was filled, and there was a long queue and waiting time.

Our team were skeptical if we could get everyone in to vote before the day ended. But per the Ketua’s suggestion of cutting the naming process of the voter’s identity short, we managed!

Volunteering for this election made me feel like I made a difference, and that’s why I wouldn’t mind doing this again for the next election.

I volunteered for two reasons. Firstly, I was curious to see and understand for myself how the process of the election is like, because it’s only through understanding it that you can know your own rights as a citizen of this country, and make sure they’re being protected.

Secondly, it was because of watching all of the campaigns. Bersih, campaign trails, Invoke, and they’re all fighting for the Rakyat. All of their efforts would be wasted if there weren’t enough PACAs, especially with what happened last election.

My experience was amazing. I got to my station in Bentong 2 hours ahead of schedule in case of traffic. Minutes after, the PACA lead said they needed more volunteers at this school in another town about 20 minutes away. I jumped in the car and tailed him to the school. It was a very small town, and only about 700 voters. Considering that it was a midweek polling day in a rural kampung, we got a turnout rate of about 80%.

The support and teamwork in my group was astounding. The team heads really made sure the volunteers knew what we were doing. Even on the day itself, if we ran into any trouble or if we were unsure, it only took a message to the group and the team head would be at the door within minutes to help out.

I was lucky to have volunteered with a team that was so willing to help out, but what made me feel like I made a difference was just by being present, and showing a commitment to doing my part for my country. I’d be happy to volunteer again, and take on more responsibilities. One day, I hope that the rakyat’s faith in the government and the election process will be restored.

Having a clean election this GE14, and making sure the voices of the rakyat were heard was thanks to the PACA volunteers. No matter the scale of their contribution, from directing people to the right saluran, or counting ballots for hours at a time, they helped protect the integrity of our election.

We can only hope there comes a day when we don’t have to rely on the PACAs to have an honest election. It might feel far in the future, but we’re a step closer to restoring our faith in our democratic system.

* Names have been changed to protect the privacy of the individuals.